Sealed for life
Standard on all Lochiel Trailers

Conventional tapered-roller wheel bearings came from the 1970s automotive industry, but were later discontinued in the late 1990s as better designs became commercially available.  However, their low cost continues to attract low budget trailer manufacturers - so you will find them on trailers throughout New Zealand.  (Ask any mechanic about "bent stub axles".) 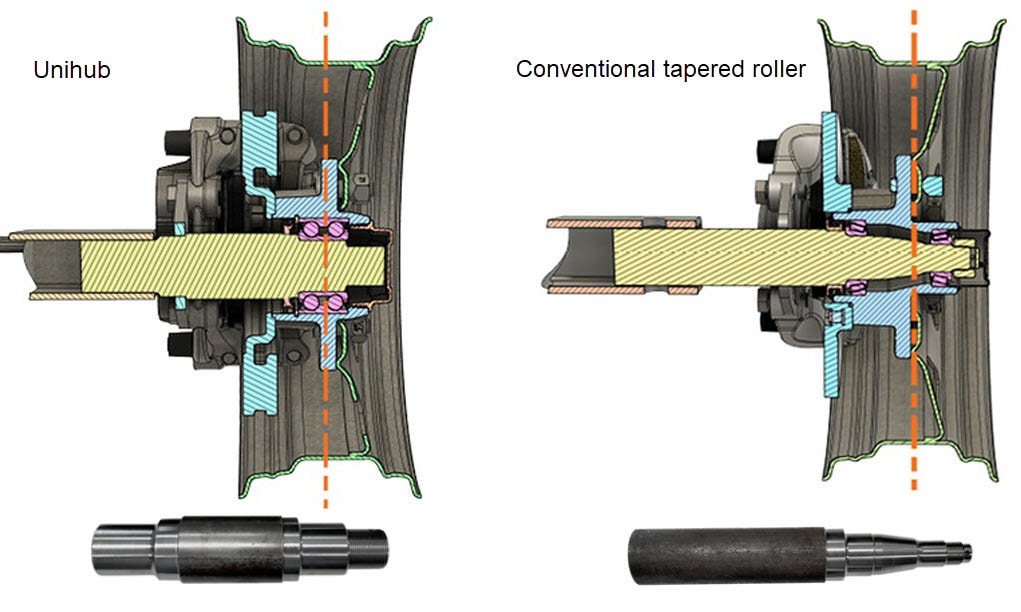 Current common trailer hub designs with taper roller bearings were never originally designed to be used with the centred style rims they are paired with. They disproportionately load the smaller outer bearing with 65% of the axial load, which can (and often does) lead to bearing failure.  The stub axles see loads further along the shaft where they are narrower and weaker, which can (and often does) lead to bent or broken stub axles.

By contrast, Unihub’s design (wheel, hub, stub-axle and bearing) is optimised to ensure that axial and radial loads are always carried where you want them to be - directly through the bearing centre, on the thicker part of the stub axle.

These shorter and thicker shafts mean massively increased safety margins with Unihub - the 1.8T combination having a peak load safety factor of 4.8x and 5.6x on the 3.0T hub. The Unihub can withstand bending loads for far longer.

Ask anyone involved with fleets or trailer hire - or even the people who service trailers.  Bent or broken stub axles, overheated bearings - all signs the manufacturer didn't fit Unihub as standard.
​At Lochiel, Unihub is not an optional extra.  We fit them as standard.